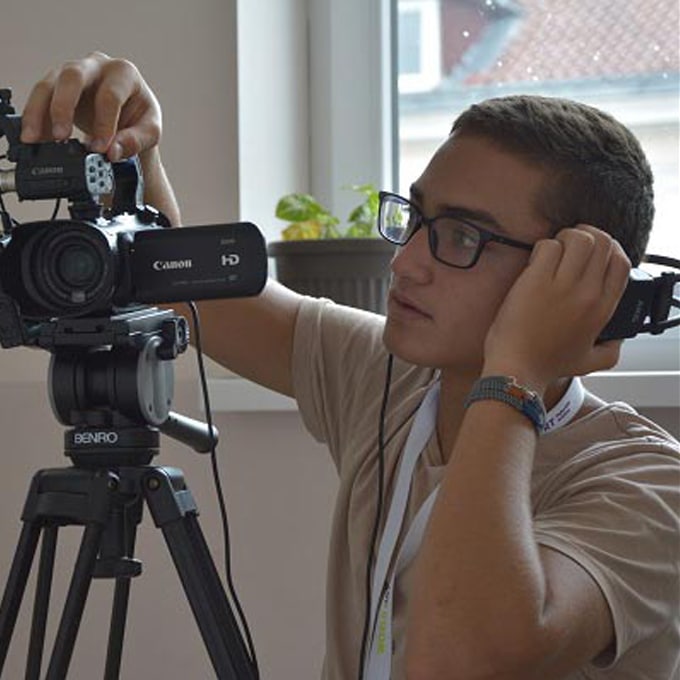 I am a communications and film student and in 2018 I attended the ORT Digital Skills Academy in Sofia, Bulgaria. But I am also an actor in Israel and took part in the academy program because of my experience on social media and particularly Instagram, where I have around 46,000 followers.

I heard about ORT after participating in a competition at school. The goal was to create a script about overcoming cancer and make a short film. There was a cash prize and also a place at the Digital Skills Academy up for grabs. My group won and I was chosen to represent my school in Sofia.

Having never been to a summer school I was worried I might be bored, and afraid I would not find my place because I did not know anyone. But this was wrong – the first day was strange, but by the flight home I was crying because I did not want to leave.

The experience changed me. I was with 20 students from around the world – France, Spain, Italy, Russia, Bulgaria, Ukraine, Lithuania, Kyrgyzstan. I discovered new things about myself, learned a lot about cinema, visited amazing studios and learned to co-operate with people who do not speak my language.

Thanks to ORT I received extensive knowledge on how to use the camera properly, how to frame filming, to work in a studio, to edit and how to direct a live broadcast. These are things I had not studied at school. I learned that everything is possible.

The academy had a huge impact on me. I became involved in projects on behalf of my school; I became the best student in my film classes and helped fellow students understand what I had learned in the academy.

I could see that behind the DSA’s day-to-day schedule there was a lot of investment and work, the hope that no one would be dull for even a moment.

The most exciting part of the experience was Shabbat. There were students and people of different faiths. Everyone listened patiently to the old woman who spoke about the Jewish religion. I was never proud to be a Jew like I was that Shabbat. My friends, Omar, a Muslim, and Julian, a Christian, wept together with the same magical feeling.

They were very excited to see our pride in Judaism. I will never forget that moment.

Becoming an ORT alumni added a chapter to my life. I conquered another peak. I came back with insights, more self-confidence, and stories to tell my grandchildren. It reminds me how fortunate I am and for that I am grateful.

For perhaps the first time in my life I was so proud and excited of my Judaism – I cannot describe it in words. I connected emotionally to people I would not normally talk to, making real friends and having an experience I will never forget. It was a once-in-a-lifetime trip full of learning, love, friendship, curiosity and great fun.