Since 1880, ORT is the only global Jewish educational network that provides students with a premier education that prepares them for advancement and life-long success. For more than 140 years, ORT has offered access to educational programs in under-resourced communities; today, ORT also serves as a foundational Jewish institution in diaspora Jewish communities around the world.

The ORT network reaches more than 200,000 people a year in schools, universities, and vocational training programs in more than 30 countries.

ORT continually assesses its programs to be relevant in whatever the current environment is in a particular geographic region. Evolving educational methodologies and technological advances are also essential components of ORT programs. By being nimble, ORT remains at the forefront of education that prepares people to lead successful, meaningful lives.

ORT America is a non-profit organization consisting of thousands of people throughout the United States who share a common, binding interest in supporting ORT, Israel and the Jewish people. Based in New York City, ORT America has a presence in 8 regions across the country.

We bridge the gap between ability and opportunity by providing leading science and technology education. 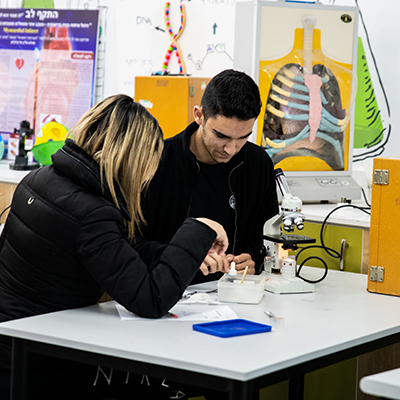 Change the world, heal the world - an ideal driven by the Jewish tradition of empathy and compassion. Every ORT student is encouraged to weigh the issues, seek potential solutions and then actively apply their own unique skills to change lives for the better.